(For my English-speaking friends, that title is a somewhat too direct translation of a Norwegian phrase meaning there’s been a bit of a hitch. The rest of this post will be in Norwegian, but I’ll attempt an English version in the next few days.)

I made my first attempt at Geocaching back in… 2005 or thereabouts? At a time when a separate GPS unit was required, before the birth of smart phones. With the use of my father’s Garmin unit the husband and I made an attempt at finding a cache that was supposedly located at the bottom of Lillegårdsbakken here in Trondheim. We never found it, and the cache is no longer there.

Since then I have occasionally made vague attempts at getting started, which has resulted, amongst other things, in me apparently having two usernames on Geocaching.com, and another failed attempt some time in the early autumn of 2016 to find a cache near our house, with some children in tow. Then the husband went to Riga with a friend of ours who happens to be a geocacher and was persuaded to join since there was an event on, and voilla, he was hooked. Shortly after we found a few caches along Ladestien on one of our Sunday outings, and I discovered the neccessity of paying for a premium membership if I wanted to be able to log (or even see) the caches myself, rather than just tailgating him. So I did. During the autumn break we used caching as an excuse to take breaks on our drive to Oslo and back, and the kids got quite enthusiastic. And then winter hit and outdoorsy stuff was much less tempting. Just before Easter, however, while we were out to catch some Pokemons and spin a stop (to maintain a streak) we found a cache near our house and I was reminded to bring our “swag-box” when we went away for Easter. So during the Easter break I found a cache at Fetsund station while waiting for the train, the kids and I looked unsuccessfully for one in Arvika and found one in Charlottenberg. Once the husband joined us we found one by Grue kirke and searched fruitlessly again for a DNF from last year nearby. And we resumed the habit of using cache locations as convenient stops when driving north again at the end of the week.

So when we needed an excuse to get out of the house on Monday (which is a bank holiday here), a combined Pokemon and cache hunt seemed ideal. Which led to three caches found, three caches not found, one new Pokemon in the Pokedex and more than 10,000 steps walked (according to the Fitbit), more, probably, by the 4-year-old. And I guess that was sufficient to hook me. Now I’ve set myself a goal to bag one cache a day, either on my way to work or at lunch, until I run out of caches in the relevant area. Though I am going to have to change that to “at least one”, because once you get going it’s too tempting to find just one more.

I’ve set up a separate Instagram-account for geocaching, sooner rather than later this time: @lattermild_geocache, but since this blog is lying here quite unused I will see if I can’t manage to blog my way through town as well, cache by cache. Don’t expect daily blog entries, though. That would be asking rather too much…

Day one went well, though I had to search for a bit the cache was reasonably easy to locate.

On day two however, I first attempted one where the cache and the log are not in the same place, and it was way too cold to hang around and search. I passed one nearby which I think I located pretty easily, but where there were too many people passing for me to fish it out without attracting attention, so I’m leaving that for another day. Finally, I decided to have a last shot before hurrying in to the office and it was third time lucky as this one was just where it was supposed to be, and not a muggle in sight.

And now I am scratching my head over some of these multi- and mystery caches. Ah, well. No doubt practice will help.

While browsing the available caches I came across this multicache one that is actually a pub crawl. So that’s an obvious candidate for a night on the town, but perhaps not so family-friendly.

In honour of International Women’s Day, let me show you a little something that happened on Twitter. 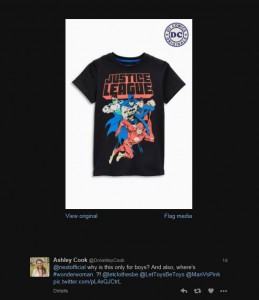 @DrAshleyCook asked @NextOfficial: “why is this only for boys? And also, where’s #wonderwoman

Next, in their wisdom, answered over two tweets (tweet 1, tweet 2): “Hi there are many members of the Justice League not included on this tee…” “These 4 went best with the space we had . Sorry if this has caused you any offence.”

Which is wrong on so many levels. 1. It doesn’t answer the first question: Why is this only for boys? 2. So the four who went best with the space just happened to be male? 3. Actually, all design wisdom suggests that any group should consist of an odd number of things to be most pleasing to the eye.

So I call bullshit.

I had the bright idea of putting a slow cooker on the wishlist for Christmas, and indeed one appeared under the tree, courtesy of the in-laws. Having tried The Pioneer Woman’s Slow Cooker Chicken Tortilla Soup as the first dish and been delighted with the convenience of spending ten minutes on prep in the morning only to come home to a kitchen smelling deliciously of soup after work, I was hooked. There was only one problem with the recipe as we saw it: The chicken. Don’t get me wrong, I am not a vegetarian and I love chicken in the right circumstances, but I can control my enthusiasm for “boiled meat” and so can the husband, and all in all it felt a bit superflous. So. I googled “vegetarian slow cooker bean soup”, glanced at a few recipes and decided to just wing it.
Obviously I winged it on the basis of a somewhat vague recollection of the Pioneer Woman recipe, credit where credit is due, but here’s what went in this morning:
2 very small onions, chopped
1 whole Chineese garlic, chopped
4 carrots, washed but unpealed, chopped
1 yellow bell pepper, chopped
1 pack of chopped tomatoes, happening to have basil (this was what we had in the pantry)
1 can of tomatoes with onion and garlic
1 pack of mixed beans (according to the pack, I’d call it mixed legumes, as it contains chickpeas)
1 pack of black beans
the water I used to rinse out the previous four containers (a little over half a litre, at a guess)
1 cube chicken stock (if you’re actually a vegetarian, obviously use vegetable stock instead)
about 1 teaspoon cumin
perhaps half a teaspoon chili powder
a little salt
a little black pepper
And I popped it on Low and left for work. When I came home, some 9-10 hours later, it was bubbling merrily and smelling quite delicious. I ran an immersion blender to smooth it out a bit and then greedily ate three bowlfuls with a little grated cheese and some nachips to garnish.
This made 6 x 1 cup/2.5 dl platefuls, and since I’m half-heartedly watching what I eat at the moment and I’m planning to eat this again (over and over) I roughly calculated the calorie content and came to 1200ish for the whole, that is 200 kcal per 2.5 dl plateful.

When in Britain we tend to stock up on cheddar, since you get much better quality for a fraction of the price. So also this time, and since I remembered to plan ahead I brought along a mini cooler we’ve had for a few years which is lightweight and packs flat. I filled that up with cheddar and a bag of frozen corn to help keep it cool. Once home, therefore, I had rather a lot of now thawed corn, and decided it was a good opportunity to try making a corn chowder.

I used this recipe for Corn & Cheese Chowder from the Pioneer Woman as a starting point, but as usual I improvised. And as it turned out rather nice, though I do say so myself, I need to note down what I did…

Instead of using bacon, I substituted some bacon fat I had in the fridge for the butter at the start. I also didn’t have half-and-half (or the Norwegian equivalent) so I used a mixture of semi-skimmed milk and turkish yogurt. And I dropped the bread bowls. Also, some of my quantities were a little skewed. To summarise:

As for the preparation I mostly followed the directions in the original, except for the obvious (adding bacon fat instead of butter at the beginning, skipping the “fry the bacon” step).

Quantity-wise it fed two easily, with enough left over for another dinner for two. 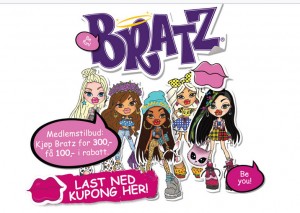 1. An electric bike. A Cannondale sounds good, but I’ll settle for a cheaper version.

(Getting to the more realistic pricerange:)

5. Found a supplier, have ordered one, am planning to get my parents to pay for it (at least partly).

We visited my parents today and I persuaded my mum to get the rest of the Lego down from the attic and to see if there were any instruction booklets as well. There were. By no means all the booklets have been kept, mainly the space themed ones, it seems, which may reflect my brother’s interest, but enough to make me dance a little for joy (well, internally).

The lass and I spent the afternoon happily sorting through just a couple of the boxes, and I managed to find parts enough to build one small set according to instructions, 6822: Space Digger. According to Brickset it’s from 1981, which would make it likely to be one of mine, as that is the year my brother was born, so he would not have been into Legos yet… 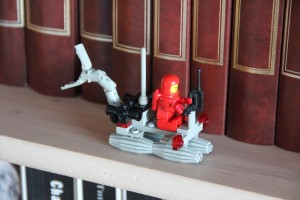 The lass thought it was really cool, which is nice, perhaps that means I get to dig around for parts for some of the other sets next time we visit.